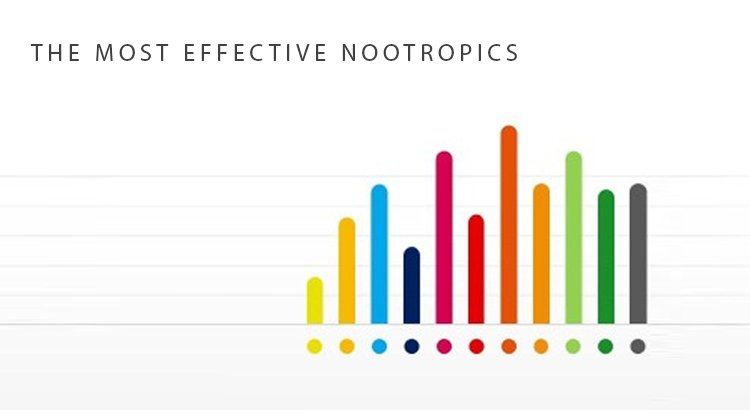 What are the most effective nootropics available on the market? Is there any way to find out?

Though there is a growing body of research on various smart drugs, the field of nootropics is a dynamic one in which the experience of users often outstrips the information available in scientific literature.

Even spending countless hours scouring the web for the results of research, studies and clinical trials might not provide the most up-to-date perspective on which nootropics are most effective.

One interesting way to find out what nootropics are currently considered most effective is to ask the people who are taking them, and that’s exactly what a 2014 survey by Scott Alexander did. Alexander asked the members of the net’s two largest nootropic communities, Reddit’s r/nootropics and Longecity’s Brain Health forum, to take a survey describing their use of and experience with 31 different substances.

The potentially nootropic substances included in the survey range from well-known smart drugs like the racetams to natural nootropics like bacopa monnieri and lion’s mane, and even vitamin D and choline.

The survey asked respondents to rate the substances on a simple scale of 0 (had no effect at all) to 10 (had a life-changing effect). The survey garnered a total 162 responses from a 92% male and 8% female demographic, with an average age of 25.

Stressing that his intention was to shed light on the relative efficacy and popularity of nootropics rather than to establish a definitive hierarchy of effectiveness, Alexander reported the results of the survey as follows.

Most Effective Nootropic: A Tie Among Well-Known And Proven Stimulants

The survey showed that the title for the most effective nootropic is shared by two central nervous system stimulants, caffeine, and Modafinil/Armodafinil.

Caffeine is perhaps the most ubiquitous of all stimulants, available in everything from tea, coffee, and soft drinks to over-the-counter headache and allergy remedies.

Modafinil (sold under the name Provigil) and a variant called Armodafinil (sold under the name Nuvigil) are controlled eugeroics; drugs used to treat excessive daytime sleepiness. Modafinil has been studied extensively and proven effective, and Armodafinil research indicates it is similarly effective. Neither is available without a prescription, but the Modafinil derivative Adrafinil, which came in at the number 5 mean rating, is legally available for purchase without a prescription in the US and Canada.

The next two most effective nootropics, which Alexander characterized as “exotic nootropics” in his analysis, were phenylpiracetam and coluracetam.

Both newer members of the well-known and widely used racetam family of nootropics, these two substances appear to have decided psychostimulatory properties, and both are currently being tested for their effectiveness in treating Alzheimer’s disease and other neurological disorders.

In recent studies, phenylpiracetam was found to be effective in restoring cognition following a stroke, treating vascular encephalopathy, and as an effective component in the complex treatment of epilepsy.

Coluracetam, also known as MKC-231, currently has no human testing results but has been shown to increase cognition in animal testing, probably by enhancing the uptake of high-affinity choline. Though coluracetam is classified as a member of the racetam family, its mechanism of action is different from that of other racetams. Rather than modulating the release of the neurotransmitter acetylcholine, coluracetam appears to directly interact with the interact with the high-affinity choline uptake or HACU process, which draws choline into a neuron for synthesis into acetylcholine.

Interestingly, the ratings for effectiveness and popularity don’t necessarily coincide. Phenylpiracetam was listed as the 15th most popular nootropic, while coluracetam came in at number 23 in popularity.

Rounding Out The Top Five: A Russian Prescription Drug Sold As A Supplement In The US

The number 5 most effective nootropic in the survey was Noopept, a synthetic molecule that has an effect similar to that of piracetam, one of the most well-known racetam nootropics. However, the effective dose of Noopept is much smaller than that associated with piracetam.

Noopept was developed in Russia and is sold there as a controlled substance, but it is sold in the US as a dietary supplement. Noopept has been tested extensively and has demonstrated a positive effect on memory consolidation and retrieval as well as neuroprotective properties, preventing memory deficit in subjects with receptor blockages.

Noopept was cited by the survey respondents as the 8th most popular nootropic.

Ayurvedic And Natural Medicines In Middle To Bottom Mean Ratings

Though many people are very enthusiastic about the effectiveness of natural nootropics and traditional Ayurvedic medicines for cognitive enhancement, most of them ranked in the middle or lower in this survey.

Rhodiola rosea came in at number 12 in the mean ratings, ashwagandha at number 16, bacopa at 18, and lion’s mane at 25, while ginseng and gingko biloba had mean ratings of 27 and 28, respectively.

In his analysis of the survey results, Alexander noted that rhodiola, ashwagandha, and bacopa all ranked barely above the threshold for placebo, while ginseng and gingko biloba were actually rated at lower than the survey’s placebo level.

Two of the most well known and widely used nootropics, piracetam and pramiracetam, both ranked just above the median in the list of substances that respondents felt had a life-changing effect.

This result is interesting in that Piracetam was listed as the third most popular substance and piracetam came in as the fourteen most popular.

In his analysis of the results, Alexander noted that these rankings could be due in part to the fact that the format of the study does not clearly indicate the large variation in responses to each of the substances, with few substances demonstrating and obvious consensus on their effectiveness.

Creatine and L-theanine, substances that are not necessarily classified as nootropics, both ranked in the top half for effectiveness in the survey.

Creatine, a naturally occurring organic acid that supplies cellular energy, actually came in at number three on the list of substances the respondents classified as having a life changing effect.

In his analysis of the survey results, Alexander noted that its inclusion is of questionable value in a nootropics survey because most of the respondents who ranked it high also mentioned that they used it as an exercise supplement rather than for its cognitive benefits

L-Theanine, an amino acid that is one of the components of tea, is widely recognized for its calming and rejuvenating effects, tied with Noopept at number six on the list of substances that had a life changing effect. Theanine has been extensively studied and shown to modulate brain function in humans, relaxing the mind without inducing drowsiness. L-Theanine is usually stacked with caffeine for a cool energized focus.

The Bottom Line: A Wide Distribution Of Opinions

While the overall results do give a good idea of what the community finds life-changing, it still appears that most nootropic substances have a wide range of opinions.

What one person may consider a life-changing substance may not have much of an effect on another person.

Noting that he hopes to repeat the survey with a larger number of responses and more in-depth questions on dosage, effects, and side effects, Alexander invited others to review and analyze the data he gathered. The data can be downloaded as follows: Raw data: (.xls) (.csv) Sanitized data: (.xls) (.csv)