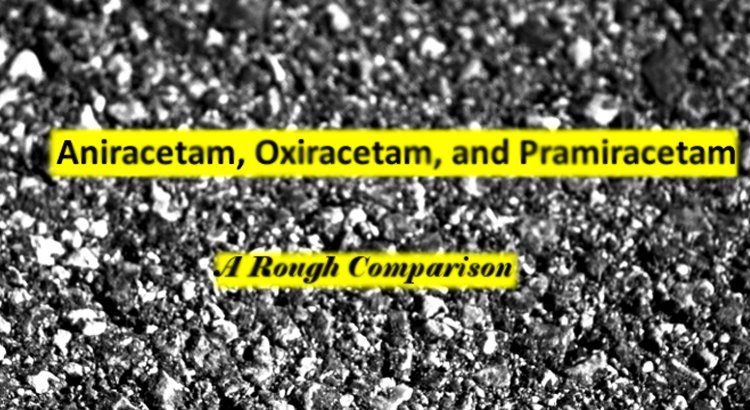 Introductory Notes
In this guide we’re going to be covering three very popular racetams that have excellent nootropic properties to help you decide which racetam is best for you. These nootropics are featured in our Beginner Nootropic Stack Guide as well as our Best Nootropic Stack. These racetams may also work well when combined with a preformulated natural nootropic such as Mind Lab Pro, as mentioned in our Mind Lab Pro review.

The Racetam Family: An Introduction

The racetam family of nootropics is an extremely varied and interesting group of chemicals. By now, I assume if you’ve reached this page you know what nootropics are and have heard of piracetam, the “original” racetam. While piracetam is the first and most researched racetam, newer and more potent derivative nootropics have been created.

Piracetam is not the strongest of the racetams, and many would argue that there are better options for increasing cognitive performance. Since the advent of piracetam, there are now many different variations to its original chemical structure that have produced stronger, more potent, racetams with varied effects on cognition, memory, and learning in the brain.

Some of them, like aniracetam, have anxiolytic effects, reducing anxiety and increasing confidence, some of them enhance your sense of sound and make music sound amazing like oxiracetam, and some of them have slight stimulant-like effects like pramiracetam.

Piracetam is still a highly recommended racetam, especially for just starting out, or part of a stack, but once you are ready to explore beyond it, another racetam is a logical next step. That’s why, for the sake of this guide, we won’t be focusing on piracetam but instead will explore some other more exciting racetams.

Which Racetam is Best?

Today, the three we are going to cover are aniracetam, oxiracetam, and pramiracetam, as they are three of the most prominent and (mostly anecdotally) studied racetams. These are the three that people are often asking on forums “which racetam is best?” because they all have similar but slightly different benefits and sometimes people are left a little unsure which to try.

Given that they all have different and unique chemical structures, this means they all produce different metabolites and will affect the brain in slightly different ways.

They each have potent nootropic effects with the ability to increase memory and learning capacity, but they each have slight differences in their effects.

Aniracetam, Oxiracetam, and Pramiracetam: How Do They Compare?

There’s no simple answer to which racetam is best. They’re all good in their own ways.

They each have robust nootropic effects, but the individual nuances in their effects may help you decide which one you want to try.

Many people take aniracetam for its mood-enhancing properties. Oxiracetam is a favorite of the nootropic community for its logic and energy boost. Finally, pramiracetam is regarded as one of the most effective nootropics for focus.

If you really want to find out which one is the best for you, the best way to proceed is to experiment and try them out yourself. We all have a unique biochemistry, and the perceived effects may also be somewhat subjectively more or less pleasing to you depending on your personal preferences.

There are other racetams that you may want to explore once you’ve experimented with these more common choices. Other racetams, such as phenylpiracetam and coluracetam are very interesting, but it is recommended to consider these more exotic options once you’re already familiar with the more commonly used racetams.

You can’t really go wrong when picking any of these racetams as they all boost memory when dosed correctly, especially when taken in conjunction with choline supplementation and as a part of a well-designed stack.

If you still haven’t decided which racetam is best for you, test them out, one at a time, for a week or two in order to find out what works best for you.