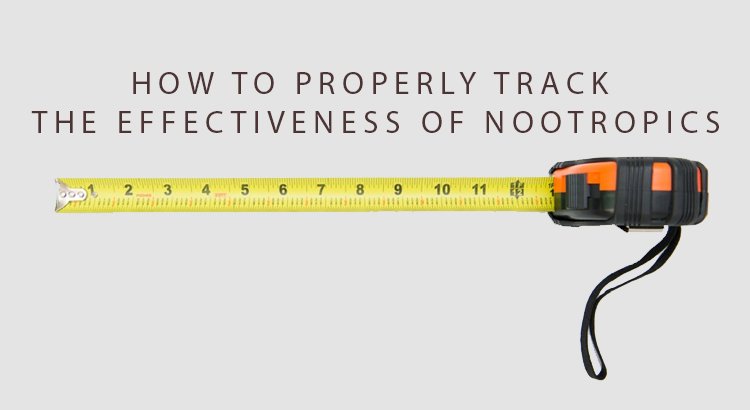 How can you tell if the nootropics you’re taking are really enhancing your brain power?

If you’re basing your evaluation on subjective responses (“Yeah, I feel pretty smart today!”) or circumstantial evidence like passing a test or remembering a phone number, you really can’t tell how effective your nootropics are. It might be nootropics that are making you feel smart, but it also might be those three cups of coffee you just had. Getting a good night’s sleep the night before the test could have been responsible for your passing grade, and it’s possible that you remembered that phone number because it’s similar to your own phone number, or perhaps because it’s attached to a very attractive person that you really want to contact.

The only way to seriously evaluate the effectiveness of the nootropic you’re taking is to approach it scientifically, establishing a self-tracking single subject design experiment. If you think that sounds like a grim and tedious process, think again; there are a number of outstanding online resources that provide the tools you need for tracking and evaluating cognitive performance with tests and activities that are engaging, fun, and best of all, free. Here are three of the best.

Quantified Mind is an excellent place to start. Rather than focusing on IQ, the site offers a fun and fascinating and collection of tools that assess and measure a wide range of specific cognitive skills. You have to register in order to use all the tools Quantified Mind offers, but registration is fast and free.

The team behind Quantified Mind includes Google researcher Yoni Donner, Skritter founder Nick Winter, and Stephen M. Kosslyn, Director of the Center for Advanced Study in the Behavioral Sciences and Professor of Psychology at Stanford University. The former chair of the Department of Psychology and Dean of Social Science at Harvard University, Kosslyn has authored or coauthored 12 books and over 300 papers on the nature of visual cognition, visual communication, and individual differences.

The site is organized into experiments, each of which includes several tests that measure how the user’s cognitive performance is influenced by specific conditions or activities. The tests on Quantified Mind are as colorful, compelling, and addictively enjoyable as games, but they’re based on very solid science. All the tests are patterned on well known and scientifically validated assessments that have been modified as necessary to guarantee dynamically challenging repeatability, purity of skill isolation, evaluation validity, and optimum efficiency and engagement.

The tests measure a number of specific skills, including reaction time, executive function, verbal learning, working short-term memory, visual perception and cognition skills, and motor skills. Each of these skill areas has demonstrated a strong correlation to success in “real world” tasks and has closely predicted outcomes such as school performance, completion of higher education, occupation, and income.

By establishing a baseline and then repeating the tests over a period of time, users can track their results and determine what factors or conditions make them smarter. The home screen features ongoing experiments that the user can join. The experiments currently featured on the home screen track the cognitive impact of time of day, skipping breakfast, meditation, sex, and coffee, but you’ll find many more ongoing experiments you can join by clicking on the “Design Experiment” button after logging in.

Users are also encouraged to create their own experiments, which makes Quantified Mind perfect for tracking the effectiveness of nootropics. After you’ve completed a few tests and gotten a feel for how the site works, revisit the “Design Experiment” page and set up your own system for testing the effects of your chosen nootropic. Use the dropdown “focus” list to select the specific skills that you want to track.

Cambridge Brain Sciences is another excellent cognitive assessment site, offering an entertaining, engaging, and scientifically proven battery of tests to measure and assess brain function. The site is free to use but registration is required in order to access all of its features.

The Cambridge Brain Science concept was developed by Dr. Adam Hampshire and Dr. Adrian M. Owen during their time at the MRC Cognition and Brain Sciences Unit, Cambridge UK. Though the founders have since moved to the Brain and Mind Institute at the University of Western Ontario in Canada, they continue to develop the concept under the auspices of WORLDiscoveries.

The 14 tests available on the site evaluate cognition in the areas of memory, reasoning, concentration and planning. The Cambridge Brain Sciences tests have all been used by the site’s founders in scientific studies of brain function and cognition and have been described in many peer-reviewed scientific publications and leading academic journals. Many of the tests have been used in functional neuroimaging studies to illustrate brain mapping and to investigate how head injuries and disorders such as Alzheimer’s and Parkinson’s diseases impair cognitive function.

The Cambridge Brain Sciences site doesn’t offer the same “create your own experiment” option that Quantified Minds does, but it’s simple to set up your own pattern of testing that can be repeated to evaluate how the nootropics you’re taking are effecting your cognition. Using the scientifically established single subject design protocol, you would start by determining which tests would be appropriate to measure the cognitive skills you expect your nootropic to improve; for example, if you’re testing the effectiveness of piracetam, oxiracetam, or pramiracetam, all of which are noted for their memory enhancing capabilities, the memory tests would be an appropriate choice.

The next step would be to establish a baseline by taking the tests prior to intervention (in this case, without having taken the nootropic). If you’re a registered user the site will save your scores and even present them in custom graphs, making it easy to track your progress. Continue with your evaluation by introducing the intervention – in this case, the nootropic you’re tracking – and taking the tests on a regular basis to establish continuous assessment of the effects of the intervention.

To completely fulfill the criteria of the single subject design assessment you would maintain continuous assessment for a period of time, then follow up with reversal assessment. This would involve removing the intervention (stop taking the nootropic) and testing to collect data on how test performance changes.

Dual n-Back is not a single site, but rather a widely available visual cognition assessment tool that’s a variation on a well known performance task commonly used to measure working memory. In the original n-Back task, a single item appears on a grid and is displayed in different locations in each turn. The subject is asked to indicate when the current position of the item matches its position from a predetermined number of steps (“n”) earlier in the sequence. For instance, a test in which n=1 would mean the subject would be asked to remember whether the item is in the same position as it was in the previous turn; if n=2, the subject would be asked to remember if the item is in the same position that it was in two turns ago.

Not only is the Dual n-Back test an excellent tool for use in a single subject design experiment and an outstanding means of assessing memory and the effect of intervention such as nootropics, it’s also a proven method of brain training that can actually improve recall capability and increase fluid intelligence. A recent study published in the Proceedings of the National Academy of Sciences (PNAS) indicates that repeated training with the Dual n-Back memory task actually expands working memory, which predicts and correlates with fluid intelligence, which includes the ability to think abstractly, reason, identify patterns, solve problems, and discern relationships. This is particularly exciting because fluid intelligence was previously thought to be unchangeable.

Dual n-Back is available as an open-source download that you can install on your own computer to play offline, or it can be played online in a flash version or Silverlight version. It’s worth noting that Dual n-Back can be very challenging, especially at the Dual 2-Back level. New users may find it beneficial to start at the 1-Back level and increase levels as their performance improves, but experts stress that practicing at the limit of your ability is what ultimately leads to lasting improvements in fluid intelligence.

Using Dual n-Back as a tool for testing the effectiveness of your nootropics is simply a matter of following the pattern for a single subject design experiment. Start by recording your scores prior to taking the nootropic, which will establish a baseline; follow up with regular post-intervention testing, and close out your experiment with a reversal assessment, in which you once again test your performance without nootropics. Tracking your results throughout the length of the experiment will give you a clear indication of whether the nootropics you’re taking are really working for you.

Tracking Your Physical And Emotional Responses

While data tracking is the backbone of scientific evaluation, you can give yourself a more complete picture of how your nootropics are working by also tracking more subjective factors, such as your emotional and physical responses. A variety of mood-tracking mobile apps are available and free online diary applications like Penzu provide a dated journal in which to record your observations, though a simple spreadsheet or even a text file will serve the purpose. Used in conjunction with the data you collect through your testing, these observations can give you a clearer picture of whether or not the nootropics you’re taking are providing optimum benefits.

Interpreting and evaluating the data collected through testing is the heart of any experiment. If you follow the format of a single subject design experiment and repeat testing regularly so that a pattern of post-intervention performance emerges, reviewing your results in combination with your observations of your physical and emotional state during the testing period should provide a reliable indication of whether the nootropics you’re using are giving you the results you’re looking for.

How to Properly Track the Effectiveness of Nootropics was last modified: July 16th, 2021 by Braintropic.com Research Team