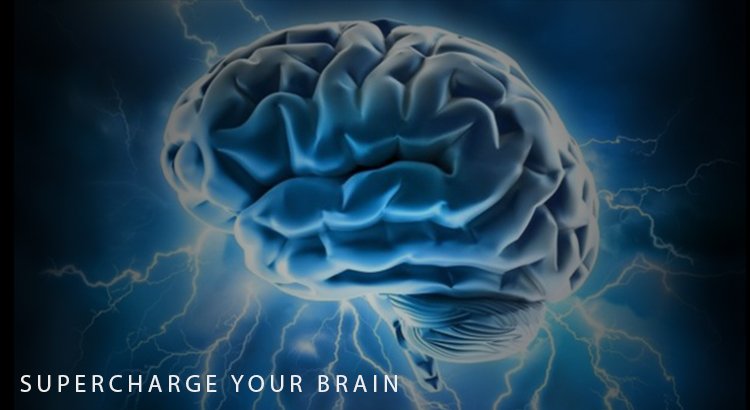 What if you could actually improve the way your brain functions?

What if you could think more clearly, solve problems more quickly and make decisions more confidently? What if you could improve your performance at school or work, intensify your sensory enjoyment, and enhance your social interactions?

Science has repeatedly proven that you can do all that and more, and the means are entirely within your reach. These five simple lifestyle changes can really supercharge your brain.

Nootropics or smart drugs are the most immediate means of giving yourself a brain boost. Unlike simple stimulants such as caffeine or amphetamine, modern nootropics go beyond increasing alertness and actually enhance cognitive function in many areas, including memory, sensory perception, focus, and learning.

Nootropics work by modifying the production and processing of a variety of neurotransmitters, crucial brain chemicals that send signals throughout the body. Neurotransmitters travel through the nervous system and bind with specific receptors, triggering virtually all brain and body functions. Nootropics specifically target those that control cognitive functions such as memory, focus, energy, learning, and mood. Different nootropics influence different neurotransmitter systems, and each type of nootropic produces different effects.

The neurotransmitter acetylcholine, which together with its receptors makes up the cholinergic system, is one of the most important in terms of cognitive function. Many nootropics, such as those in the racetam family (piracetam, pramiracetam, oxiracetam and others), focus primarily on modifying the operation of the cholinergic system, enhancing the production of acetylcholine and improving the efficiency of its receptors. The result is an overall gain in a broad range of cognitive functions, including learning, memory, decision making ability, and sensory perception.

Other nootropics primarily target the production and processing of mood and energy controlling neurotransmitters such as glutamine, dopamine, or serotonin. By optimizing the availability of these chemicals and maximizing the body’s ability to utilize them, nootropics such as noopept and sunifiram improve energy, focus, and mood. Many nootropic users find that by carefully combining or “stacking” nootropics they can create an optimal state of maximum cognitive function.

Nootropics are legal, affordable, readily available supplements that don’t require a prescription. Most have few if any serious side effects when taken responsibly, but it’s important to remember that they’re potent drugs that alter the way the brain and body work. The first step in successfully boosting your brain power with nootropics is doing some research. Taking the time to learn the effects of various nootropics and how they work in the brain and body will help you get the results you’re looking for.

Read our introduction to nootropics if you’re new to nootropics. If you already have some experience but want to take things to the next level, read up on our best nootropic stack.

2. Choose Nutrition that Provides the Best Fuel for Your Brain

The fuel you provide for your brain and body has a significant effect on how well they perform. Research supports the effectiveness of a “brain boosting” diet consisting mainly of fresh fruits and vegetables with moderate amounts of high quality protein and very little sugar, refined foods, or processed red meat. This type of plant-based Mediterranean-style diet has been associated with increased cognitive function.

But establishing healthy food habits is only part of “eating smart”. There are a number of nutrients that have been proven to boost brainpower, and incorporating them in your regular menus can go a long way toward enhancing your cognitive abilities. Here are just a few:

This type of meditation, which focuses on non-judgmental awareness of feelings, sensations, and state of mind, has been repeatedly shown to result in improvement in stress, anxiety, and other symptoms, but the MGH study confirmed its cognitive impact by documenting increased brain density in the area of the hippocampus, which is important for learning and memory.

Further evidence for meditation’s cognitive boosting abilities was provided by a University of California study which showed that brief mindfulness meditation training boosted scores on standardized tests and improved working memory. In addition, classroom experiments at George Mason University indicated that students who meditated before a lecture retained knowledge better and scored better on a quiz than students who did not meditate.

Mindfulness meditation has been shown to be an effective treatment for a wide variety of cognitive disorders, from stress and anxiety to post-combat fatigue and even pain management, but ongoing research is showing that its effects are physical as well as mental. Mindfulness meditation has been documented to reduce cravings for nicotine, change the decision making process, and even slow the progression of HIV.

4. Exercise to Activate the Brain’s Learning and Memory Centers

Regular aerobic exercise has long been known to enhance alertness and improve mood by increasing oxygen intake and blood flow to the brain, but a 2013 Harvard Medical School study discovered that the positive effects are more specific. The researchers isolated a neuroprotective molecule called irisin which is produced in the brain during endurance exercise. When the researchers artificially elevated the level of irisin in the blood, it successfully crossed the blood-brain barrier and activated the genes involved in learning and memory.

The older we get, the more cognitive benefits exercise may have. Studies at the Center for BrainHealth at the University of Texas, Dallas show that participating in regular exercise helps normal aging adults improve both memory and brain health as well as physical fitness. The research suggested that a combination of aerobic exercise and complex thinking can actually alter and improve the structure of the mature brain for increased cognitive function.

Exercise has also been shown to stimulate the production of new brain cells in an area of the brain that is important to memory and learning, simultaneously boosting the brain’s dopamine receptors and treating depression with an efficacy similar to that of pharmaceutical antidepressants.

One of the newest and most exciting ways to boost your brainpower is by giving your gray matter a good workout on a regular basis with custom-designed brain training programs.

Widely available online as games, apps, and dedicated brain training websites, these programs are high stimulus activities that require the user to process information in a manner that enhances the brain’s neuroplasticity, or ability to reshape itself. In much the same way that mastering a physical skill improves the body’s strength, flexibility and coordination, brain training “exercises” groups of neurons and makes them more efficient at accomplishing mental tasks.

For many years it was believed that general fluid intelligence (the ability to infer relationships, do complex reasoning, and solve novel problems) was fixed and unchangeable, but brain training has challenged that idea. Brain training has been shown to improve working memory capacity, or the ability to quickly retrieve stored information in the presence of distraction. There is a powerful correlation between working memory capacity and general fluid intelligence, and a recent study published in the Proceedings of the National Academy of Sciences (PNAS) indicates that repeated training with a brain training program called Dual n-Back actually expands working memory, which predicts and correlates with fluid intelligence.

The physiological mechanisms behind brain training start with the mental challenge of complex thinking, which stimulates neurons and makes them become active. Neurons in an active state get more oxygen and nutritive elements, which both protects them and helps them survive. Stimulating neural activity also multiplies the number of connections between nerve synapses and is in fact key to generating new neurons. This process of increasing neurons and synapses builds what amounts to cognitive reserves that strengthen the neural network as a whole and provide defense against the effects of aging.

But can you really improve your brain power?

The answer is an absolute, unqualified yes.

There is no doubt whatsoever that we can make ourselves smarter; the idea that intelligence is unchangeable is a tired myth that science has debunked over and over.

Nootropics, nutrition, mindfulness meditation, exercise, and brain training are just a few of the many ways we can enhance our cognitive function and improve our mental abilities. Brain fitness, like physical fitness, is a state that can be improved with dedication, patience, and persistence.

As research uncovers more and more facts about our brains and the way they work, it becomes more and more clear that how smart you can become is largely up to you.

How to Supercharge Your Brain was last modified: July 16th, 2021 by Braintropic.com Research Team