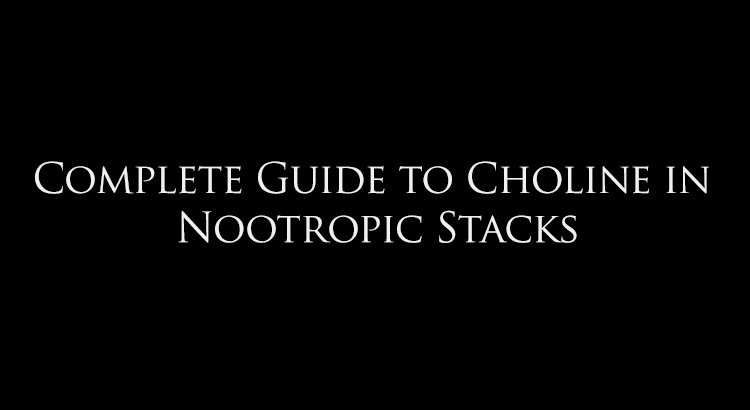 Choline is a true VIP in the world of nootropics. Not only is it an essential nutrient and powerful brain booster in its own right, it’s the must-have supplement that brings out the best in other cognitive enhancers. Safe, effective, and affordable, choline is an invaluable addition to every nootropic stack. In this guide we break down what choline is, why its important for your nootropic stack, and which choline source to choose.

An Introduction to Choline

Choline is essential to both brain and body. An essential nutrient generally classed with the B vitamin complex, choline is crucial to maintaining health at every age and is used to treat and prevent an amazing variety of physical diseases and disorders, including asthma, hepatitis, and even cancer.

But for nootropic users, choline is particularly important because of its ability to enhance memory, focus, and cognitive function, both alone and in combination with other supplements. It’s the precursor to acetylcholine, the neurotransmitter most strongly associated with memory, learning, and overall cognitive function, and is well known as a brain booster in its own right. Choline also enhances and amplifies the effects of other nootropics and is considered by many to be an important component of every nootropic stack. It’s particularly effective in combination with the racetams, which are among the most popular and potent smart drugs.

For knowledgeable nootropic users, the question isn’t whether to add choline, it’s which source of choline will serve them best. That answer depends on many factors, including personal preferences, circumstances of use, and how the various choline sources will interact with the other nootropics in the stack. In order to chose the choline source that’s best for you, it’s important to understand as much as possible about choline, starting with the basics.

Choline is an essential water-soluble nutrient that is crucial to both brain and liver function in the human body. Chemically choline is a quaternary ammonium salt; though it’s generally classed with the B vitamin complex, by strict definition choline is actually a micro-nutrient rather than a vitamin. It was first isolated in 1862 but wasn’t classified as an essential nutrient until 1998.

Choline has a number of functions in the body. In terms of nootropics and cognitive enhancement, its most important function is as precursor of the neurotransmitter acetylcholine, which is crucial to nerve communication and is crucial for brain functions related to memory, concentration, learning ability, and virtually all aspects of cognition. The body breaks down choline from your diet into the neurotransmitter which is why having adequate choline in your system is essential for optimal brain performance.

Research has shown that adequate choline is absolutely crucial to human health at every age. The need for plenty of choline actually starts before birth; Fetal brain development is seriously adversely effected when mothers don’t get enough choline. Postnatal choline supplementation enhances learning, ameliorates the effects of fetal alcohol syndrome, and reduces the chance of brain disorders.

In both children and adults, choline has been shown to suppress the inflammation and oxidative stress associated with asthma. Adequate choline intake has been proven to halt and prevent liver disease. It is used in the treatment and prevention of brain disorders like Tourette’s disease, cerebellar ataxia, and schizophrenia. In healthy adults, choline can enhance the development of lean muscle mass and delay fatigue.

Choline becomes even more important as we age, effectively restoring memory and other cognitive skills that may be blunted by age-related diseases and conditions. Perhaps most notably, it has been proven to improve mild to moderate Alzheimer’s dementia. The American Psychological Association lists choline as a nutrient that has significant potential as a therapeutic agent in the treatment of memory disorders, depression, and Parkinsonism.

Where Does Choline Come From?

The body synthesizes some choline in the liver, but not enough to meet the recommended daily adequate intake (estimated to be 425-550 mg daily for adults). Though there are many dietary sources of choline, including liver, beef, eggs, cauliflower, navy beans, tofu, almonds, and peanut butter, it has been estimated that as much as 90% of the population actually consumes an inadequate amount of dietary choline.

In addition to natural synthesis and dietary sources, choline is also available in supplement form. Choline supplements vary dramatically in strength and quality. The most common choline supplement, lecithin, is also the weakest form of choline and may not actually enhance cognitive abilities.

For nootropic purposes, as mentioned before, the real reason we’re interested in choline supplementation is that we want to ensure that our brain has the optimal amounts of the neurotransmitter acetylcholine. Choline from natural sources can help with this but an alternative option are acetylcholine precursors that are more efficient in raising acetylcholine neurotransmitter levels such as CDP choline, Alpha GPC, or centrophenoxine. All three are potent and reliable supplements that can raise your neurotransmitter levels with different strong points and different interactions with other nootropics and will be covered in more detail below.

Why Choline is Important in Your Nootropic Stack

If you’re taking nootropics, you should definitely consider adding choline to every stack. And if you’re taking racetam class nootropics like piracetam, pramiracetam, aniracetam, or oxiracetam, additional choline isn’t a “should,” it’s an absolute must for getting optimal results. Here’s why.

Choline has nootropic properties in and of itself, but in combination with racetams it becomes a powerful potentiator. The effects of both the choline and the racetam are amplified, and studies have shown that when racetams and choline are used together the effects are far superior to that of either drug used alone.

Racetam class nootropics make a significant draw on choline stores, so supplementing the amount of choline available for conversion is highly recommended. Not only is it the only way to guarantee optimal results from your nootropics, its the best way to avoid the minor but annoying headache that is commonly associated with racetam use.

Choline Source Comparison: Which One Is Best?

Once you’ve decided to make a choline supplement part of your nootropic stack, how do you know which add? There’s no simple, clear-cut answer, and what’s right for one person or occasion may not be right for another.

Choline supplements vary considerably in just about every respect, from mechanisms of action to potency to cost. Each has its own positives, and determining which to add to your nootropic stack is a matter of understanding how they work, knowing what they offer, and deciding which is the best fit with your needs and your nootropics.

These are the cheapest and most widely available choline supplements, found in most supermarkets , drug stores, and “big box” retailers. Unfortunately, they’re also the least potent and effective. Though these supplements typically contain a high percentage of choline by weight, the choline they deliver appears to be less effective than that of Alpha GPC, CDP Choline, or centrophenoxine. Lecithin/choline bitartrate supplements seem to have approximately the same effect as consuming dietary choline; they can prevent deficiency, but provide very little in terms of nootropic benefit.

This concentrated choline supplement is safe, effective, and fast-acting. It’s highly bioavailable when taken orally and crosses the blood-brain barrier rapidly and reliably, directly delivering high quality choline to the brain for conversion to acetylcholine. Structurally composed of choline, glycerol, and phosphate, it metabolizes into a combination of choline and glycerophosphate on absorption. Alpha GPC is structurally 40% choline by weight is considered a cholinergic, or primary choline storage form.

Alpha GPC is a favorite with many nootropic users, in large part because it works quickly and reliably in conjunction with the racetams but also because of its many other benefits. It has been shown to significantly boost mood and increase mental energy without creating restlessness or interfering with sleep. It’s also believed to support overall brain health and may actually have anti-aging benefits. It’s also known to stimulate the release of HGH (human Growth Hormone) and can increase strength and decrease recovery time after exertion.

CDP Choline, also known as citicoline or cytidine-diphosphate choline, is a powerful and eminently “stackable” nootropic supplement best known for its ability to enhance memory, increase energy, and protect the brain against memory loss. It has also been shown to improve focus, increase mental energy and clarity of thought, and may even be a useful treatment for head injuries, stroke, and neurodegenerative diseases.

CDP choline works quickly and reliably, metabolizing within an hour of ingestion. Structurally CDP choline is 18.5% choline by weight , but though it’s not chemically classified as a cholinergic it metabolizes into choline and cytidine, which disperse rapidly throughout the body, cross the blood brain barrier, and enter the central nervous system. The choline component acts as a precursor to acetylcholine and the cytidine component is converted into uridine, a nucleotide base that is important to neural membrane synthesis and is believed to enhance cognition. CDP choline also stimulates the sympathetic nervous system and can increase energy and motivation.

Centrophenoxine isn’t technically a source of choline but does have the ability to increase acetylcholine levels in the brain making it pair well with cholinergic nootropics while delivering a variety of other benefits as well: it’s a proven memory booster that enhances mood, increases energy, and is considered an outstanding anti-aging and brain protectant supplement. A fat soluble compound of PCPA (parachlorphenoxyacetic) and a synthetic version of DMAE, it is metabolized in the liver and is classed as a cholinergic.

Centrophenoxine increases the synthesis of acetylcholine, which makes it a natural pairing with racetams or any nootropics draw heavily on choline stores. It also acts as a brain energizer by increasing the absorption of both oxygen and glucose, which in turn enhances mood, general cognition, and clarity of thought. Centrophenoxine has also been shown to act as a potent antioxidant, flushing waste material out of brain cells and even breaking down the buildup of lipofuscin, an age-related toxin that adversely effect memory and cognition.

Choline is generally very safe and well tolerated, and most users report no side effects when using choline in recommended amounts. At very high dosages some side effects, including nausea, headaches, gastrointestinal distress, low blood pressure, vomiting and diarrhea are occasionally reported. Reducing the dosage usually eliminates any unwanted side effects.

Choline is an absolutely essential supplement for anyone who is serious about optimizing their cognitive abilities. Alpha GPC, CDP choline, and centrophenoxine are all outstanding nootropic choline supplements that work extremely well on their own and really shine in combination with other nootropics, particularly racetams. Any of them is a great addition to a stack and will rapidly and reliably deliver the additional choline the racetams require, so choosing among them is less a matter of “which is superior” and more a question of “which one suits my current needs best.”