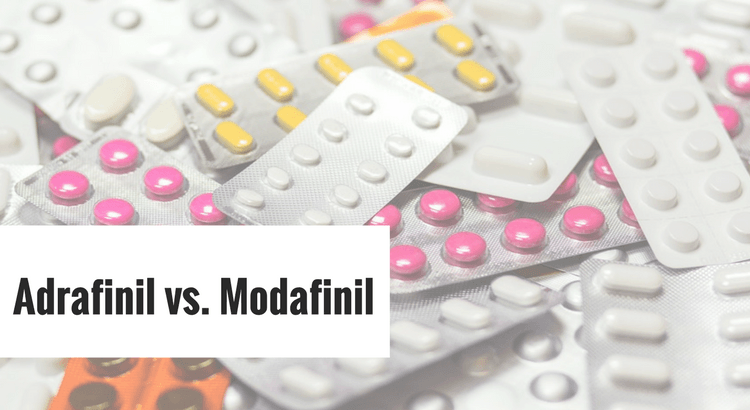 Adrafinil and modafinil are both popular modern stimulant nootropics, well known for giving brainpower a boost while temporarily banishing fatigue and sleepiness.

Here’s a comparison that may help you decide which one is right for you.

Begin With The Basics: an Overview of Eugeroics

Adrafinil and modafinil are both considered eugeroics, or wakefulness-promoting agents, that work by promoting long-lasting mental arousal.

This sets them apart from traditional stimulants such as caffeine or amphetamines, which promote wakefulness by increasing overall physiological or nervous activity throughout the body.

Eugeroics are a relatively new class of drugs, developed in the 1970s as a treatment for narcolepsy and other sleeping disorders. Their action is much more specific than that of other stimulants, primarily targeting brain chemical systems in the hypothalamus and amygdala rather than the nervous system as a whole.

Because their effects are not based on increasing overall psychomotor activity, eugeroics work more gradually, providing a “smoother” energy, and wear off more gently than other stimulants. This eliminates much of the agitation and euphoria associated with amphetamines, as well as the rebound exhaustion and “crash” typical of stimulant-produced sleep deprivation.

They have become very popular smart drugs, widely used off-label by students, shift workers, and others interested in extending wakefulness and energy while performing at peak cognitive levels.

Extensive research has confirmed that both adrafinil and modafinil have powerful nootropic capabilities, improving cognition, memory, and mood in sleep-deprived as well as non-fatigued people.

Eugeroics are invaluable for the treatment of sleep disorders like narcolepsy, obstructive sleep apnea, and shift work syndrome because they can effectively prevent excessive daytime sleepiness without giving rise to hyperactivity or interfering with regular sleep patterns.

Both adrafinil and modafinil typically create less nervousness and anxiety than other stimulants, and research indicates they present only a very limited risk for the tolerance and addiction that is characteristic of the long-term or off-label use of traditional stimulants.

The side effects of adrafinil and modafinil that are most commonly reported include anxiety, insomnia, headache, indigestion, and dry mouth. These side effects may be brief and temporary, though if they persist or worsen over time the user is advised to seek medical advice.

Though there have been reports of serious side effects, including abnormal heart rhythm and blood pressure fluctuations, they are not common and are not associated with moderate dosage for short-term use.

How They’re The Same

Upon ingestion, adrafinil is metabolized in the liver, where it is converted into the active metabolite that we now know as modafinil, with the remainder being metabolized to the inactive modafinilic acid.

Since adrafinil is the precursor of modafinil, both drugs have the same mechanisms of action and very similar benefits and effects.

Mechanisms of Action: Both adrafinil and modafinil selectively activate neurons in the hypothalamus and amygdala, increasing the output of the brain’s orexin/hypocretin system, which is largely responsible for wakefulness. This action also elevates histamine and norepinephrine levels, contributing to alertness, and at the same time increases the availability of glutamate, an important excitatory neurotransmitter that is crucial to memory, executive function, and general cognition.

Adrafinil and modafinil also increase the amount of dopamine available for use in the brain. Dopamine is the neurotransmitter that creates the pleasure/reward response and increasing its availability plays a major role in elevating mood and increasing alertness. Traditional stimulants like amphetamines boost dopamine levels by directly stimulating increased dopamine release, but eugeroics increase dopamine availability by blocking the neural receptors that remove dopamine from the system. This gradual and somewhat indirect effect on the dopaminergic system is believed to make adrafinil/modafinil considerably less potentially addictive than other stimulants.

Benefits and Effects: Both adrafinil and modafinil are exceptionally effective at promoting wakefulness, increasing alertness, inhibiting the drive to sleep, delaying the onset of fatigue, and reducing the perception of tiredness. Studies have shown that eugeroics are actually more effective than methamphetamine at inhibiting the urge to sleep, producing more consolidated periods of wakefulness without the extreme rebound sleepiness associated with other stimulants.

Adrafinil and modafinil have also been shown to create measurable improvement in a wide array of cognitive abilities, ranging from increasing working memory and fluid intelligence to improving spatial and episodic memory, pattern recognition, executive function, and performance on tasks that require higher-level thinking. Clinical trials confirm that eugeroics improve mood in both sleep-deprived and non-fatigued subjects, and new research suggests that adrafinil/modafinil may actually have neuroprotectant properties that contribute to overall brain health.

While both adrafinil and modafinil are safe, effective, and well tolerated, it’s important to note that long-term daily use is not recommended.

Adrafinil and Modafinil: The Differences

While adrafinil and modafinil are close to identical in many ways, there are some significant differences between the two.

Onset, Half-life, and Duration of Effectiveness: Modafinil acts more quickly than adrafinil, which must be processed by the liver before it takes effect. Modafinil is generally at peak levels in the blood within 60-90 minutes, while adrafinil can take up to an additional hour to reach peak levels.

Toxicity: Because adrafinil must be metabolized in the liver, it has some potential for toxicity with prolonged use. While elevated liver enzymes are sometimes associated with adrafinil use, actual reports of liver toxicity are rare and are associated with long-term, high-dosage use.

Legal Status: One of the most important ways in which the two eugeroics are different is in their legal status. Though both adrafinil and modafinil have been banned as performance enhancing drugs by the World Anti-Doping Association, adrafinil is currently unregulated and is available without prescription in most countries. Modafinil is listed as a controlled substance (Schedule IV) in the US, and it cannot be legally purchased without a prescription in most countries, including the US, Canada, and most European nations.

Cost: Adrafinil costs significantly less than modafinil, which can be staggeringly expensive. Depending on which pharmacy you use, modafinil can cost over $300 for a 20-tablet prescription in the US. Adrafinil is widely available at a fraction of the cost of modafinil.

Which Is Right For You?

If you have a condition for which your physician has prescribed modafinil, it is the right choice for you.

However, from a purely practical standpoint, adrafinil is usually a better option for all other users, for several reasons.

Cost is also a major factor. The price of modafinil can be a real burden for prescription buyers unless insurance covers at least part of the cost, and it could be prohibitive for users who are interested in the nootropic benefits of eugeroics rather than the treatment of a sleep disorder.

Adrafinil is available in a wide range of dosages at a fraction of the cost of modafinil.

While both adrafinil and modafinil are safe, effective, well tolerated, and virtually identical in many ways, adrafinil is the right option for users seeking nootropic benefits because it’s readily available as a nootropic or dietary supplement and can be legally purchased without a prescription at a fraction of the cost of modafinil.

Though adrafinil could potentially have some toxicity implications that modafinil doesn’t have, those are related to long-term use at very high dosages and have not been observed when adrafinil is taken at recommended doses for short periods of time.

If you’re interested in nootropics that can temporarily banish tiredness and keep you at maximum energy and cognitive ability for hours without disrupting your normal sleep cycle or setting you up for a rebound crash, adrafinil is a nootropic worth considering.

Adrafinil vs. Modafinil: A Side by Side Comparison was last modified: July 16th, 2021 by Braintropic.com Research Team