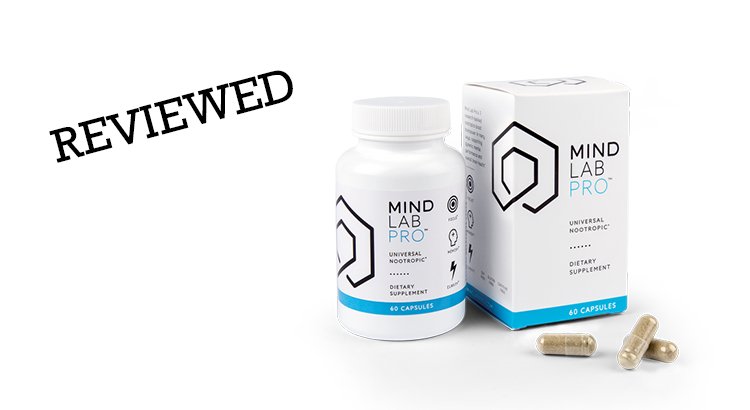 Today, I am going to review Mind Lab Pro. This pre-made nootropic stack was designed by Opti-Nutra. After hearing lots of buzz about it on Reddit and other forums over the last year, I decided to check it out for myself.

Now that I have been using it for the last six months, here is my report.

So, how does Mind Lab Pro compare to these other stacks that I have reviewed over the last couple of years?

Every company has their own philosophy on stack ingredients, quantities, and their approach to brain optimization. But Opti-Nutra has a unique take on how to go about enhancing the brain.

Mind Lab Pro, on the other hand, is promoted as the first “Universal Nootropic.” While other stacks target 2 or 3 brain pathways, Opti-Nutra designed this stack to unlock every area of your brain.

This sounds like a tall order for a nootropic stack, but let me start by saying that my experience with Mind Lab Pro has been exceptional. Here’s my review.

Mind Lab Pro falls into the category of supplements known as “nutraceuticals.” The ingredients are derived from natural sources.

The ingredients for Mind Lab Pro are a step above any other pre-made nootropic stack I have reviewed. Some of the ingredients are similar to Onnit’s Alpha Brain but with some significant differences.

The quantities of every ingredient in Mind Lab Pro are listed on the label. Alpha Brain, on the other hand, uses an undisclosed “proprietary formula” for most of its stack. You don’t know exactly how much of each ingredient they are using.

Another main difference is Mind Lab Pro’s use of Maritime pine bark extract as the primary neurovasodilator. Unlike Alpha Brain, that uses Huperzine A.

I’m not saying that Huperzine A isn’t a great way to get cerebral blood flow going. It is. But Huperzine A has a half-life of over 24 hours. Due to its long half-life, most people prefer taking it either every other day or even only twice per week. That is impossible to do when it’s already blended into your preformulated stack that you want to take daily.

The other main difference is in the quality of ingredients used in Mind Lab Pro. Wherever possible, the company uses premium patented compounds containing verified ingredients and potency. For example, Cognizin® instead of regular citicoline. Or Suntheanine® instead of regular L-theanine. It’s a little more expensive this way, but you are getting the very best available ingredients on the market.

Here is the list of ingredients in Mind Lab Pro:

These amounts are based on a typical dose of 2 capsules. If you take the maximum daily dose of 4 capsules, double the dose listed above, it makes for a very potent stack. For most people, myself included, 2 capsules per day is enough.

You can look at the official Mind Lab Pro Ingredients Page for even more information on their formula.

Opti-Nutra has taken a unique approach in designing the Mind Lab Pro stack. Each nootropic used in this stack provides multiple brain-boosting activities. There are no single-taskers included. Which means you can use fewer individual nootropics to achieve the same brain optimization goals. When combined, smaller amounts of each can be used to get the same effect.

Citicoline is used by most neurohackers to boost acetylcholine in the brain. Taking a choline precursor, such as citicoline, is especially important when you are taking nootropics from the racetam family. Even if you’re not, citicoline does so much for brain optimization.

Once digested, citicoline is converted into cytidine and choline. The choline is used to synthesize acetylcholine and increase levels of dopamine, which assists in attention, cognition, concentration, focus, mood, learning, and memory.

Tyrosine is an amino acid used by the body to synthesize the catecholamines dopamine, epinephrine, and norepinephrine.

Tyrosine also helps restore neurotransmitters that are depleted by stress.

So we cover neurotransmitters and regeneration with this nootropic. Opti-Nutra uses N-Acetyl-L-Tyrosine because it is more bioavailable than regular tyrosine.

L-Theanine, which occurs naturally in green and oolong tea, is an amino acid. This multi-tasking nootropic addresses brain waves, neuroprotection, and neurotransmitters.

Studies show L-Theanine helps boost alpha and theta brain waves which are associated with relaxation, creativity, and relief from trauma. It increases GABA, serotonin, and dopamine levels in the brain as well as boosting Brain-Derived Neurotrophic Factor (BDNF) and Nerve Growth Factor (NGF).

It provides an energizing and calming effect while improving cognition and memory.

L-Theanine is also an antagonist of NMDA receptors which inhibits the release of glutamate, protecting your brain from over-stimulation.

Phosphatidylserine (PS) multitasks by boosting brain energy, neurotransmitters, provides regeneration, and affects brain waves. PS makes up about 15% of the total phospholipid pool in your brain.

PS also serves as a phosphatidyl donor for phosphatidylcholine synthesis, when taken in combination with citicoline.

Bacopa helps boost neurotransmitters, brain energy, cerebral circulation, and offers neuroprotection. The ancient Hindus liked it so much they named it “Brahmi,” after their supreme god Brahma.

Bacopa is considered an adaptogen. The active compounds bacosides A and B improve electrical signaling between neurons and help rebuild damaged neurons. It promotes the enzymes needed to protect neurons from free radical damage. Bacosides modulate the acetylcholine, GABA, and serotonin systems which support focused thinking, a clear memory, and a better mood. Research shows it may even boost cerebral blood flow.

Maritime pine trees, in response to their harsh salty and windy environment, developed potent antioxidant properties within its bark.

These antioxidants are capable of crossing the blood-brain barrier allowing them to neutralize the effects of toxic free radicals in the brain.

The maritime pine bark extract also serves as a neurovasodilator that relaxes blood vessels and promotes blood flow to the brain which enhances the delivery of brain-energizing oxygen and glucose.

There is also evidence that it may aid in brain regeneration by promoting Brain-Derived Neurotrophic Factor (BDNF).

Lion’s Mane is the only known mushroom to support brain health. It’s included in the Mind Lab Pro formula to provide neuroprotection and brain cell regeneration.

Lion’s Mane is known for preventing and treating nerve damage in the brain. It stimulates enzyme production that releases Nerve Growth Factor (NGF). NGF are proteins that function to regenerate neurons, modulate cholinergic receptors and provide the neuroplasticity essential for learning.

In practice, Lion’s Mane has been shown to be effective in reducing anxiety and depression. It works to improve cognition, memory, and works as an antidepressant.

These benefits may result in long-lasting structural improvements to the brain resulting in lasting improved mental performance.

Rhodiola influences serotonin and norepinephrine levels in the brain, and the feel-good opioids beta-endorphins.

It also helps in neurogenesis by repairing and growing new neurons. It activates the synthesis and re-synthesis of ATP, your brain cell’s primary energy source. Salidroside, one of many components in Rhodiola, protect neurons from oxidative stress-induced cell death.

All B vitamins contribute to brain health, but these three have the most science backing them up.

Vitamin B6 as a nootropic affects brain energy, neurotransmitters, cerebral blood flow, and offers neuroprotection. It helps your brain make serotonin, norepinephrine, and melatonin. It helps control homocysteine, and along with vitamin B12, helps make red blood cells and immune system cells.

Vitamin B12 is in Mind Lab Pro to assist brain energy and neurotransmitters. Vitamin B12 plays a role in the efficient conversion of carbohydrates to glucose which is your cell’s source of fuel. It also helps convert fatty acids into energy.

Vitamin B12 is required to synthesize DNA, RNA, and neurotransmitters, the maintenance of myelin sheaths protecting axons, and red blood cell formation. It’s a cofactor in the synthesis of dopamine, GABA, norepinephrine, and serotonin.

The combination of B6, B9, and B12 is a clinically-backed B-vitamin stack shown to reduce homocysteine, which interferes with blood flow to the brain, contributing to brain fog and cognitive decline.

The first thing you notice when looking at the label of Mind Lab Pro is that it details exactly how much of each ingredient is in each dose. There is a moderate quantity of each ingredient at a 2-capsule dose. At 4 capsules, the potency is quite high.

After looking at how each nootropic in this stack affects several different pathways in the brain, each from a different angle, it is evident that the combination was brilliantly formulated. Each ingredient works in synergy with the rest of the stack. 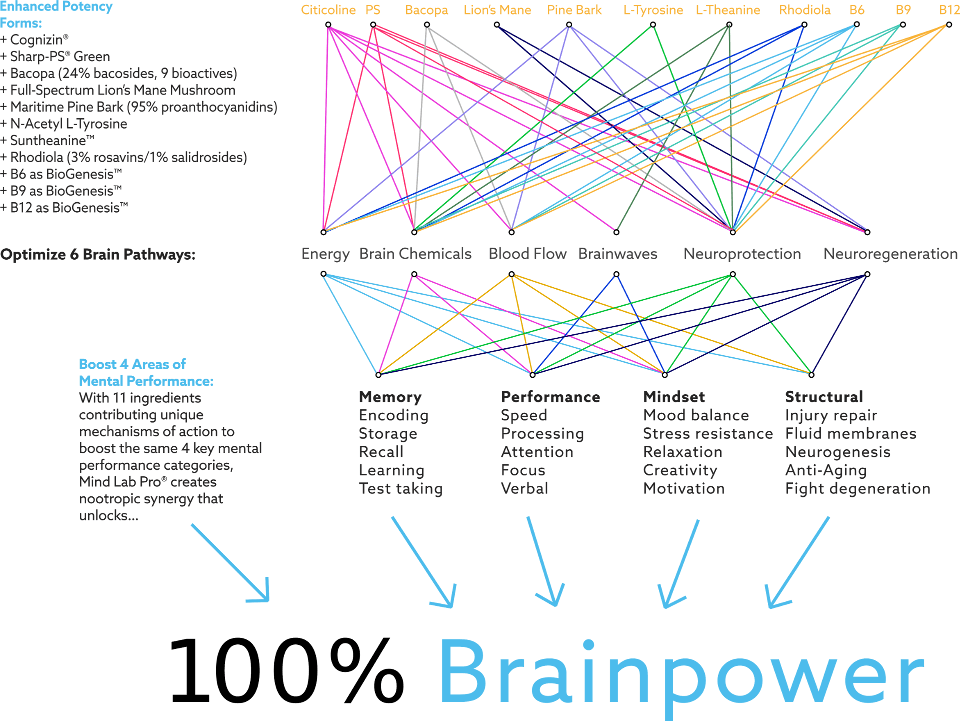 This all-natural blend of nootropics is amazingly effective in promoting brain energy, cognition, memory, and mood.

Having tried many different nootropic stacks over the years, the first thing I noticed with MLP was that I started feeling the effects soon after taking my first two capsules.

It wasn’t so much an overwhelming sense of something happening in my brain. It’s just that I had a significant improvement in mental clarity right away.

With Mind Lab Pro, focusing seems effortless. It seems easier to concentrate and stay focused on the task at hand for hours on end.

My response time at work, in traffic, and even practicing martial arts is faster. I feel sharper and more alert. Calculation and judgment are much better.

Mind Lab Pro gives me an edge that I haven’t experienced in a long time.

MLP targets affect all types of memory. Short-term, long-term, and working memory. Decision-making speed is improved. I no longer have to make lists days in advance of tasks for the week ahead. Words seem to come easier. My vocabulary seems to flow. Words and songs come up that I haven’t thought of in a long time.

Improved memory has helped me communicate more effectively both in business and in my personal life.

Since starting on Mind Lab Pro, I have found that my anxiety levels have been significantly reduced. Part of it is likely because focus, memory, and motivation are all better. But the edges have been tamed. Not dumbed down. Just the anxiety knob has been turned down.

My mental energy is also improved. Instead of feeling tired midway through my day, I can usually keep going strong.

I would recommend Mind Lab Pro to anyone who feels they want an extra edge. It really is “One Nootropic Formula For All.”

Anyone would benefit from using Mind Lab Pro. Students, athletes, anyone in competitive sports or gaming, professionals, and those over 55 years old.

Have a look at the Mind Lab Pro “How It Works” page to learn more about the methodology used when they formulated their blend.

I absolutely give it a 5 out of 5 rating.

Opti-Nutra claims that Mind Lab Pro is the cleanest brain supplement ever developed. No additives. No fillers. Just pure “100% Brainpower.”

All the ingredients are tested before encapsulation to ensure they are free of allergens, GMO’s, microbes, pesticides, and herbicides. The plant-based capsules are made out of tapioca, a prebiotic fiber instead of a semi-synthetic polymer used by others. Finished batches are re-tested to confirm potency, purity, and activity. All their packaging is recycled or biodegradable.

Mind Lab Pro is an excellent choice for a premium natural preformulated stack. You are paying for a quality product that is composed of the very best ingredients.

Whether you are looking for an easy “ready to go” introduction to nootropics or an advanced nootropic user looking for a convenient foundation to build upon (such as stacking it with aniracetam or Noopept), Mind Lab Pro is a solid choice.

Mind Lab Pro is now my favorite pre-made nootropic stack. I use it regularly to give me the edge I need.

Visit MindLabPro.com to get Mind Lab Pro and experience its brain optimizing effects for yourself.